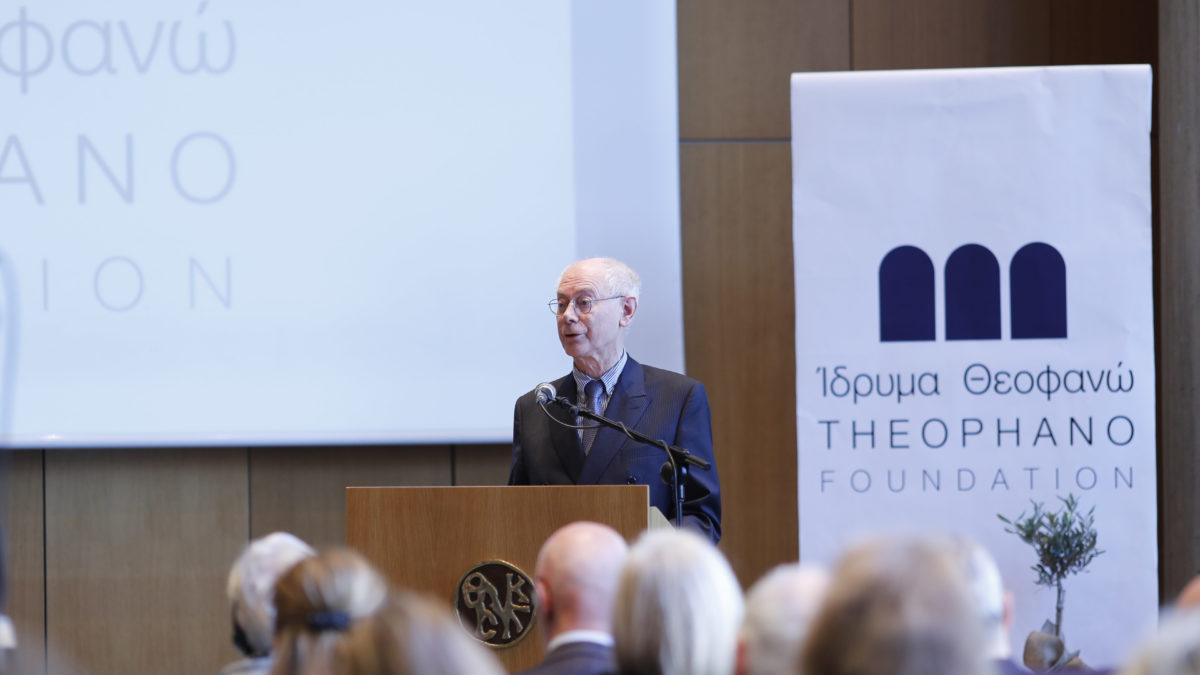 It is an honour for me to be here in Thessaloniki at the launch of this initiative. which will lead to the award of the Theophano Prize this autumn. The choice of prize name and location are full of symbols. I will mention some of them:

– It is the name of an empress from the Eastern Roman Empire who ruled in the Western Roman Empire. Born in Constantinople and died in Nijmegen, in the Netherlands, in the language area to which I belong. I add in passing that her son also engaged to a Byzantine princess but the young emperor died before he could marry her.

The Charlemagne Prize was established in 1950 when the EU still had six members. The Empire of Charlemagne included the founding EU Member States. The division of his empire after his death in 814 was at the origin of centuries of wars.

The so-called schism in the Church between Constantinople and Rome in 1054, also contributed to the fragmentation of our continent. And even later the religious wars, the sad highlight of which was the Thirty Years’ War (1618-1648), the second cruellest war in European history.

The Iron Curtain was of course a form of fragmentation although it was temporary.

This divisions of Europe were only restored by the European Union. But the Union is not yet complete. Countries with a European vocation will join our club over the next few decades to make that old dream of European unity possible. If today we make a symbol of an empress who lived and ruled a thousand years ago, then we can also dream about the future.

In the time of Empress Theophano we were of course much further away from the dream of a united Europe.

– Theophano promoted ancient culture in the West. At the time, the East was in fact culturally and economically ahead of the West. The son of Theophano, Emperor Otto III saw it as his life’s task to let the Greek refinement take the place of the Saxon roughness! The lesson to be learned is that, in the light of history, everything is in motion. ‘Panta rhei’ would say Heraclitus. No one has a monopoly forever on prosperity and knowledge. The Renaissance in Western Europe was a return to Greek culture in particular. Think of the influence of Aristotle from the 13th century on Thomas Aquinas, the greatest philosopher of the Middle Ages. Aristotle, the teacher of Alexander the Great, born in this region less than 100 kilometers from here, one of the greatest figures in world history. Every one of us is from somewhere.

– Theophano’s regency is a time of considerable peace, as the years 985-990 passed without major crises, in a nevertheless extremely turbulent and bloody time. I have recently read a lot about the Saxon emperors, including Otto the Great, and the wars they constantly waged, so we are happy to live in this time. A war is seldom great.

– Women are much less prone to war. Their nature is to give life. That is why it is also important that the new price is named after a woman. In fact, many queens in the tenth century, on an account of male rulers dying early deaths, found themselves in power, creating an age of women rulers for a small period of time.

We like to say today that Europe is the homeland of gender equality and that other civilisations lag behind us. But there is still a lot to be done and we are coming from a long way. In many countries, women were not good enough to vote until after the Second World War. Before that, they were second-class citizens. Imperatrix Theophano was not, despite fierce opposition in the beginning of the Ottonian court.

In general Theophano fulfils a bridging function between East and West, between ancient culture and the nascent new age, between men and women. More than ever, our time needs bridges, overcoming contradictions and polarisation. The differences can never be so great that they have to incite people to intolerance, hatred or even violence. The basis of our civilisation is humanism: ‘man as the measure of all things’(Protagoras), so characteristic of Greek-Roman civilisation, of Christianity and of the Enlightenment. Our history has not always been aware of this. But people have always upheld that ideal. It has ultimately led to the greatest peace project ever, the European Union. That is why the Union must be promoted and defended more.

In word and deed. Both by taking responsibility for healthy public finances, for vibrant companies, by for climate and the environment. But equally through solidarity with those who want to climb out of the valley, with those who have to take in more irregular migrants than others. We need both values, responsibility and solidarity. Both require efforts but without them there is no lasting stability.

Today there is more fragmentation than some time ago, e.g. between the northern countries bordering the Baltic Sea and those belonging to the Mediterranean area. Those who have studied history know that both don’t belong to different cultures, that each has went through a time of rise and fall. Greatness is to look beyond his narrow economic interests and beyond the time when he or she happens to be politically active. The Union must be and remain a Union.

If we do not succeed in our fight against unemployment, irregular migration, climate change, terrorism, all kinds of dumping, major inequalities, military insecurity, if we fail to meet this desire for greater protection against these threats, then we will fall into protectionism, tribalism and brutal nationalism. We must give people a ‘place’ where they are safe, where they are protected like in a home. If we don’t do that, those same citizens will reject the ‘space’ we shouted to give them more opportunities to develop and to gain more prosperity. That ‘space’ is Europe in the first place. We need to find this new balance between ‘space’ and ‘place’. We need to be aware that we also need the EU to help to solve the major problems of our time. If we weaken the EU, we will increase the problems. The time when a nation-state can only handle that, is excluded in today’s interdependence world. The ‘place’ cannot do without the ‘space’.

Greece has gone recently through a long period of misery, which is not yet completely over. It has undoubtedly eroded hope and self-confidence. Yet the Greeks have continued to believe that there was no future for them outside the EU and outside the euro area. That is why it is also important that the Theophano Foundation was originally an initiative made possible by Greeks. Prof. Schepers is the trigger but it would never have been possible without Greek friends. The Cultural Society of Northern Greece played a decisive role in making the initiative possible. People often talk about corporate social responsibility. This is a resounding proof of this.

The international jury is truly European in all senses of the word. The members have exceptional merits in politics and diplomacy, academic as well as economic. The jury will present the first laureate to the Foundation in the autumn. The profile of the winner must fit in with the design of the prize: European cooperation, the importance of education and culture, gender equality. It’s about values. Not just about name recognition. The first winners of the Charlemagne Prize were not known Europeans. In a way, they became so because they won the prize! It will be a great moment.

We will do Thessaloniki all credit.